Is Job Hopping Bad For Your Career?

Is Job Hopping Bad For Your Career?

You may well have grown up with the traditional advice that moving from one job to the next within a short space of time – or ‘job hopping’ – is bad news for your CV, and makes you look like an unstable and unpredictable hire. However, just like career breaks, job hopping is much more commonplace than you might imagine. In fact, according to a recent survey, millennials and gen Zers now spend a significantly shorter amount of time in their jobs than previous generations. Whereas now the average length of time spent in a job is 2 years 3 months, for the baby boomer generation, average job tenure was more like 8 years! With this change in behaviour has come a change in perception – hiring managers and recruiters now understand that candidates will move positions more frequently in order to attain better pay and benefits, as well as to find positions that align with life changes. In this blog post, we’ll be taking a closer look at some of the pros and cons of job hopping, and whether or not it could negatively impact your career.

What counts as job hopping?

The term itself has no strict definition, and will therefore change depending on who you ask. However, most people consider it to mean only staying in positions for a relatively short period (for example, less than one year) and doing so three or four times in a row. For some, job hopping is inconvenient but necessary. For example, your position may have been made redundant due to Covid, you may have switched your career focus, or you may simply have been unlucky and found yourself in positions that weren’t a good fit for you.

Why can job hopping be a bad thing?

No employer expects you to stay with the same company for years and years, and in fact, such a working pattern might even be interpreted by some as a lack of tenacity or ambition. However, if you have a sustained pattern of switching jobs after a few months and keep this up for a significant period of time, there is a possibility it could have negative consequences. An employer might see this as a signal that you’ll also leave your new position fairly quickly, or that you lack commitment and get bored easily. It’s also important to carefully examine your own reasons for job hopping – maybe you get so excited about the prospect of a better title, larger salary and new set of challenges that you don’t stop to think whether or not the position is right for you. If this is a position you frequently find yourself in, it might be time to take stock and think about how you can achieve career happiness through a more conventional route before it becomes an issue.

More than anything, it’s important that employers and recruiters understand the reasons behind your decision to switch roles frequently. If you held a series of contract positions, for example, it’s obvious that your employer would change frequently. You also may have had very valid reasons for moving on when you did, for instance, if you had your eye on a particular position but needed to climb the ranks in order to get there. If you feel that your pattern of job hopping may have an impact on your prospects, it’s important to have an honest conversation with your recruiter about your motivations, so that they can explain this on your behalf. If you’re job-seeking independently, you can use your covering letter or CV to briefly explain your situation.

What are the benefits of job hopping?

As long as you aren’t changing roles too often and are able to strike a good balance on your CV, there are plenty of reasons it might make sense to job hop at some point during your career. 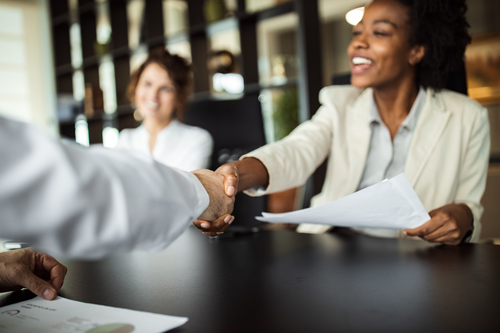 Higher salary. It’s an unfortunate fact that some employers aren’t great at awarding pay rises when they’re due, so many employees will prefer to switch roles rather than wait for a bonus or salary increase that may never come. Plus, the remuneration increase that comes with switching roles is often more significant than a pay rise that will be awarded by an employer, which generally simply keeps pace with inflation.

Career advancement. If you’re an ambitious sort, it can be frustrating to sit around and wait for a promotion, especially if you feel more than ready to take on additional responsibility. Changing jobs allows employees the chance to take on a more senior role at a time they feel ready, rather than allowing the decision to rest in someone else’s hands. And if you feel this way, research suggests you’re certainly not alone – in the past 12 months, there’s been a 200% increase in people Googling the term ‘work progression’!

New skills and experience. Switching roles demands that we adapt to new environments, people, and ways of working, all of which can be highly beneficial for personal and professional development. An employee who has experience in different sectors and has worked on varied projects may well have the edge over someone who has stayed with the same company for a number of years.

Relationship building. Employers highly value soft skills such as communication, adaptability, and general relationship management with colleagues. Every time you switch roles, it means you’re building a whole new set of connections and forging friendships that allow you to work as part of a team, and boosting your emotional intelligence. This is a sign of someone with great people skills, who isn’t intimidated by new challenges.

Ultimately, whether job hopping is a help or hindrance to your career will depend on the justifications behind it, and how well you’re able to convey these to recruiters or potential employers. For example, if you only leave roles to attain responsibility and benefits that simply weren’t attainable at your previous position, almost everyone will be understanding of this. It’s also important to keep check of your own behaviour – if you find yourself quickly feeling dissatisfied in a new position or are tempted to run at the first sign of trouble, this is an indication that you might be in the wrong job, or that you need to start communicating your needs more effectively. We’re all responsible for our own career paths, and few people make the decision to job hop lightly. Rather, it takes bravery, honest introspection, and planning. As long as you’re making careful choices that you know will bring greater happiness and your CV tells a cohesive story about your professional journey, there’s no reasons job hopping should stand in the way of your success.

Ready for your next career move? You’re in the right place; we’ve hundreds of positions available in legal, engineering and manufacturing, IT, human resources, and more. Alternatively, you can search all our positions here, or register with us.