Why Exit Interviews Are Too Little, Too Late

Why Exit Interviews Are Too Little, Too Late

A polite lie we’re more used to associating with tactful breakups, but one that many of us have also paraphrased during an exit interview. Even once we’ve secured a new job, it’s only natural to feel hesitant about telling our current employer our true motivations for leaving – after all, we may still need to call upon them for a reference, and there’s no sense in burning bridges. On top of that, it just feels awkward - even a little rude - to share all the secret resentments that may have been building over the months or years. For this reason and many others, the traditional exit interview is gradually waning in popularity. Instead, more proactive methods of gathering genuinely useful and honest employee feedback are taking its place.

Why do exit interviews exist?

Exit interviews are essentially a method of harvesting information surrounding what’s keeping people within an organisation, and what’s driving them away. Employee feedback can reveal a great deal about organisational culture, and when acted upon, can create a stronger, more harmonious workplace. The overarching goal for any organisation, of course, is to retain valued employees; research has demonstrated that high turnover predicts low performance – and vice versa. In order to maintain a competitive advantage, figuring out the real reasons people are leaving a company is therefore key.

So, what’s the problem?

Although a fantastic idea in principle, there are a few different reasons why exit interviews often turn out to be useless in practice.

Perhaps the biggest issue of all, however, is also the most obvious – by the time an exit interview rolls around, it’s already too late. From an employee’s point of view, if an organisation were truly interested in what they had to say, they wouldn’t be in that position in the first place. Even if the meeting is used as an opportunity to make a counteroffer, waiting until the point of departure to do so only emphasises the lack of effort that was made beforehand. It’s also worth bearing in mind that employees don’t have to take part in exit interviews if they don’t want to, and in fact might feel more comfortable refusing if there exists a culture of fear and suspicion. Of course, all of this begs the question…

What’s the alternative to exit interviews?

Ultimately, the real aim of the exercise is to produce honest, actionable insights, and there are several ways to achieve this that may prove more successful than the traditional exit interview.

According to research, 40% of employees had at least a “moderate chance of changing their exit decision” if someone had checked in with them more frequently about their happiness at work or asked what else they needed. ‘Stay interviews’ are a proactive (rather than reactive) approach to employee retention, and involve a one-on-one structured interview between a manager or HR representative and an employee. This is a chance to have an honest discussion, build trust, and identify which aspects of company culture employees really value most. 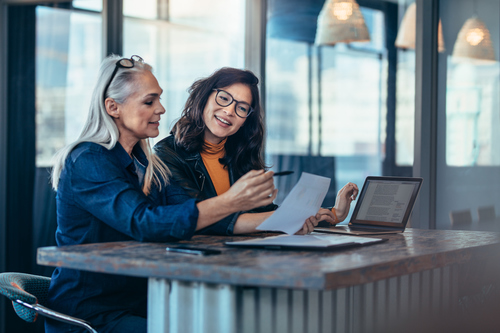 Because people often feel hesitant about delivering feedback when their name’s attached to it, providing team members access to an anonymous online portal can help encourage honesty with no fear of repercussions. This strategy also helps employees to feel that their opinions are heard and valued.

This is when an employee meets with their manager’s boss for an honest discussion about what’s currently working for them, and what’s holding them back. This can help to open up about their team’s dynamics, as well as discuss topics they may feed hesitant to raise with their immediate supervisor.

If you’re struggling for ideas on how to improve your organisation’s culture, what better way than to ask employees to help decide for themselves? Providing an open forum to kick around ideas can be a powerful and democratic way to allow team members to shape an organisation for the better, and help them feel they’ve truly played a role in how a business operates.

Connecting employees with a mentor or sponsor that holds a more senior position within the organisation can help them to feel like they have a direct line of communication with someone in a place to make a practical difference. Because they have the opportunity to develop a genuine and close relationship with a mentor or sponsor, they’ll also feel more comfortable sharing their true opinions and feeling as though they will be heard.

In conclusion, although the traditional exit interview has laudable aims at heart, it’s often simply too little, too late. There will often be valid reasons an employee is leaving, but by that point, they’ve moved on, and are more interested in preserving a positive relationship than with helping to reduce an organisation’s turnover rate. Instead, organisations should focus their efforts on reaching employees before they’ve reached the point of handing in their notice, as this is the point at which meaningful retention action can be taken. By doing so, organisations can produce a valuable feedback loop to increase retention rates and improve employee experience for good.

Looking to make an exit? We’ve hundreds of positions available in industries such as accountancy, human resources, marketing and digital, IT, and many more. Alternatively, you can search all our positions here, or register with us.