The Menopause At Work: How Employers Can Help Break The Stigma

The Menopause At Work: How Employers Can Help Break The Stigma

In February of this year, the UK government’s Women and Equalities Committee released a special report into menopause and the workplace. The report centred around a survey completed by working women of menopause age, and revealed numerous shocking findings; although 31% had been forced to take time off work due to menopause symptoms, less than one third had told anyone at work that they were suffering, and only 11% had requested adjustments to make their working lives easier. In fact, almost one in five respondents had no idea whom they should speak to in order to ask for extra support. As the Chair of the special committee Rt Hon Caroline Nokes MP commented, “Half the population will experience menopause, and women of menopausal age are the fastest growing group in the workforce. Yet the stigma is clearly huge.”

Why is there stigma surrounding menopause?

Despite the recent attention that’s been brought to the subject, the menopause is still viewed by many as a taboo, almost shameful topic. Some women are reluctant to discuss sexual or reproductive issues in general, and worry that others won’t look positively on what is an obvious marker of ageing. For women dealing with early menopause, this issue is compounded even further, as they may be emotionally struggling with prematurely losing a fundamental part of their identity. Added to this, the symptoms that accompany the menopause are often perceived as embarrassing, such as problems with memory and concentration, urinary issues, and hot flushes. In the workplace, many menopausal women also fear that they will face ageism and ridicule, and be perceived as less capable than their peers. Altogether, this is believed to be costing the UK economy 14 million working days per year, with one in four women considering leaving their jobs altogether due to a lack of workplace understanding and accommodation.

The menopause is not a protected characteristic under the 2010 Equality Act. Because of this, if an employee feels they have been treated poorly by their employer due to symptoms they are experiencing, they must sue on the basis of discrimination against one of the current nine protected characteristics such as sex, age, or disability. Employees seeking to pursue a disability discrimination claim, for instance, must demonstrate that menopausal symptoms have had a ‘substantial and long-term’ impact on their ability to carry out ‘normal day-to-day activities.’ However, because the symptoms of the menopause are considered by many to be a ‘normal’ part of life, even within the court system, the distress they can cause is often downplayed and overlooked. For example, in 2018, a childcare social worker for Leicester City Council took her employer to court citing disability discrimination due to the extreme symptoms caused by the condition, such as insomnia, and migraines. Although the decision was overturned at appeal, the original tribunal did not accept that the employee’s symptoms met the threshold for these to be considered a disability. And this case is far from isolated, as growing numbers of women are taking employers to court citing their experience with menopause as proof of unfair dismissal and direct sex discrimination – hardly surprising, considering women aged 50 to 64 are the fastest-growing economically active group in the UK.

“It is time we incorporate respect for women and our bodies into workplace policies. Most women will go through the menopause and many feel ill-equipped to manage the symptoms of the menopause at work.”

How can employers create a menopause-friendly workplace?

Minimising employee claims aren’t the only reason organisations should be concerned about supporting menopausal women at work. The resulting loss of talent, knowledge and experience should companies fail to act can be immense. The menopause is a key recruitment and retention issue, as women going through it are often at the peaks of their professional career. At a time when many companies are experiencing a chronic shortage of talent, this has never been more important. So, let’s take a look at a few simple ways organisations can make the lives of menopausal employees easier.

Establish a menopause policy. This formal policy document might sit alongside other documentation that all employees have easy access to. It should include clear definitions of terms such as menopause and perimenopause, as well as the symptoms that women might encounter and how this can impact their performance at work.  It should also provide a list of reasonable adjustments that line managers can make to help mitigate the impact of symptoms, as well as reputable sources that employees can turn to for help and support.

Provide formal training. This step is essential to educate line managers as to how the menopause can impact work, the implications for health and safety, and how to fairly and sensitively communicate with affected team members. Members of management may also benefit from unconscious bias training to ensure issues related to the menopause are not impacting the way employees are being treated.

Offer flexibility. Insomnia, hot flushes, aches and pains and other uncomfortable symptoms can mean people going through the menopause can suffer from disturbed sleep, leading to fatigue and lack of concentration during the day. Allowing employees autonomy over when they start and finish work can help alleviate these difficulties considerably, and prevent lack of productivity as a result. In addition, allowing employees to choose whether they come into the office or work from home can mean that some women with debilitating symptoms will be able to carry on working when they may otherwise have been forced to resign or take long-term sick leave. 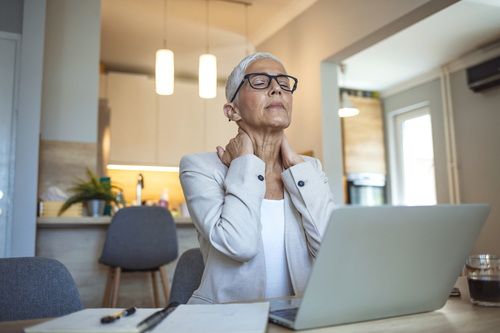 Make simple adjustments. Providing easy access to fans and improving office ventilation can make for a more pleasant working environment for employees dealing with hot flushes. The ability to take regular breaks can help to reduce the stress and anxiety that symptoms can cause, and relaxing dress code or uniform policy for menopausal women can also increase comfort levels.

Talk about it. Frank and open discussion about the menopause at all levels of the organisation, particularly at the executive level, can greatly help in encouraging employees to feel comfortable asking for help and support should they need it. Intergenerational employee resource groups can be established in which women come together to learn from and support one another, which can help to reassure employees that the organisation has a positive attitude towards the menopause and that it’s not something that should be a source of embarrassment.

Manage stress. It’s vital employers are aware that workplace stress and burnout has been demonstrated to worsen menopausal symptoms, and in some case bring symptoms on earlier. Organisations should therefore consider implementing strategies to help team members deal with stress, such as providing free access to mental health services, physical exercise programmes, and wellbeing initiatives such as meditation or mindfulness.

Remember there’s no one size fits all. Naturally, not all individuals who experience the menopause are women. Trans and non-binary employees may also deal with the same symptoms, yet may find it even more difficult to discuss this openly with their employer due to stigma and a lack of understanding. Experiences and perceptions of the menopause may also differ in relation to disability, age, race, religion, or sexual orientation. It's therefore important to represent and accommodate as wide a variety of experiences as possible.

On top of the progressive initiatives that many workplaces are adopting such as those listed above, it’s widely anticipated that legislative changes will be proposed as a result of the Women and Equalities Committee. Part of the aim of inquiry was to highlight the current lack of legal provisions for those who have suffered unfair treatment by hearing from women who have suffered discrimination in the workplace and have been forced to use rely on disability legislation. Because of these experiences, campaigners are keen for the menopause to be considered a protected characteristic under the Equality Act, which would clarify the obligations that businesses have towards employees experiencing difficult symptoms. Until then, however, the onus is on organisations to ensure an equitable environment for all.

We’re making the world of work a happier place, one candidate at a time. We’ve hundreds of positions available in industries such as accountancy, human resources, marketing and digital, IT, and many more. Alternatively, you can search all our positions here, or register with us.