Should Banter Be Banned At Work?

Should Banter Be Banned At Work?

The word ‘banter’ is older than you’d think. Believed to have originated in London as street slang to refer to aggressive exchanges intended to demean and ridicule, it later acquired a friendlier meaning more akin to the type of good-natured teasing we associate with the term today.

Despite its historic etymology, the term only really made a re-emergence into mainstream culture during the 90s with the arrival of ‘lads’ mags’. Loaded’s emblematic strapline, “For men who should know better”, offers an unintentional window into the true nature of banter culture as it existed back then: sexism, homophobia and racism could all be excused as long as it was accompanied with a wink and a nudge that excused the readers’ guilt by implying it was all ironic. It’s a lazy tactic that comedians still cling to today in an attempt to frame themselves as the undaunted adversaries of cancel culture.

Contrary to the popular belief that we’ve turned into a bunch of perpetually offended snowflakes incapable of taking a joke, banter culture is still alive and thriving. Facebook is replete with groups devoted specifically to this hazily defined word, and Amazon is brimming with banter merch – you can pick up an “Archbishop of Banterbury” t-shirt for just £9.99, if you feel comfortable awarding yourself such an accolade. The word is even used with surprising frequency as a search term on flatsharing website spareroom.co.uk by some to discover people they’d like to share a living space with. To many, it seems that either you ‘have banter’ – are fun to be around and can take a joke – or you don’t, and you’re not.

A fine line between ha ha and harassment

It's hardly surprising that banter is as ubiquitous within workplace culture as it is elsewhere. Close relationships are necessary with colleagues in order to work effectively as a team, and to make the eight hours a day we spend together more enjoyable. Gentle teasing can be a shortcut to help us bond with others, and when done with affection and skill, is a profound human accomplishment. We enjoy being made fun of when such remarks emerge from genuine insight into who we are, and help us to feel seen and understood. We cement relationships with others by exposing our weaknesses to them, and they build on that trust by acknowledging these flaws in a well-meaning way. It’s shorthand for saying that you see someone’s flaws, and accept them all the same.

Most of us understand that there is a line between what’s funny and what’s hurtful, and are careful not to cross it. For others, however, crossing the line is the whole point. In male-dominated industries, for instance, aggressive banter has been demonstrated to be an important part of relationship building. It’s a way of expressing affection, by counterintuitively being as mean as it’s possible to get away with. On paper, for instance, calling someone a d*ick certainly sounds like an insult. We all know, however, that when such terms are used within certain friendship circles, it means the exact opposite. Proponents would say that such banter is a healthy way to blow off steam in a world of excessive political correctness. Critics would say that such terms are never acceptable within the workplace, and that claiming it’s ‘just banter’ is a lazy excuse to say whatever you feel like and dress it up as a joke should anyone claim offense. 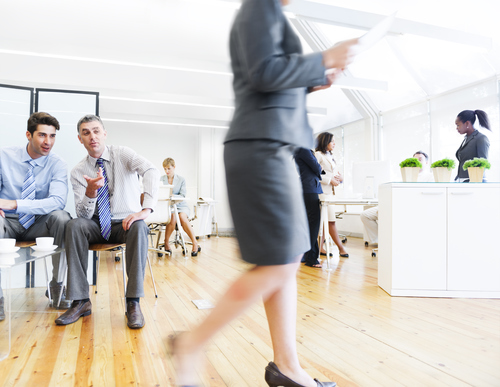 Nevertheless, the ‘banter defence’ has legal precedent. In 2018, former sales rep David Evans brought claims including discrimination and victimisation against his former employer, Xactly, after a co-worker referred to him in terms that ridiculed both his appearance and ethnic origin. Despite the harsh nature of the insult, the claims were dismissed both at the tribunal, and the appeal. The reason? The comments were deemed to be part of a “banter culture” that Evans himself had participated in. The difference between banter and bullying in the eyes of the law then, it seems, sometimes hinges on perceived consent. And yet, consenting to be degraded, even in a jokey manner, can be a problematic concept. If a female employee laughs at and takes part in sexual banter aimed at her in the office, is she laughing because she’s part of the joke, or because gendered power structures prevent her from objecting? In Minto V Wernick Event Hire Ltd, a female employee was subjected to daily remarks of a sexual nature that saw her become an “unwilling Barbara Windsor”. She won the case, with the court conceding that “banter can easily transform into bullying when a subordinate employee effectively has no alternative but to participate in order to keep their job.” Scientific papers have in fact demonstrated that banter plays an active role in maintaining “underground power systems” within male-dominated organisations that can place women at a distinct disadvantage; if they take part in sexist and misogynistic banter, they’re complicit. If they don’t, they’re excluded.

Part of the issue with banter, then, is that we rely on unwritten rules to help us understand exactly where to draw the line when it comes to ‘harmless’ teasing. Characteristics such as physical and mental health, sexual orientation, and ethnicity, for instance, are more often than not considered ‘off the table’. However, the problem with unwritten rules is that not everyone follows them, nor does everyone possess the emotional intelligence to understand why they should. There are added barriers to taking part in and understanding workplace banter culture, too – neurotypical employees may be prone to taking insults literally, and people of different cultural backgrounds or with language barriers may be perplexed by what is a uniquely Anglo-centric bonding ritual. It’s abundantly clear, then, that workplace banter is far from always harmless, and requires great tact and sensitivity maintain its positive effects.

Could we really ban banter?

Given its high potential to cause reputation and employee-relations destroying harm, it’s not surprising that banter is a serious issue for many employers, especially at a time when ED&I issues are so high on the agenda. On the flipside, however, no employer wants to be responsible for creating and enforcing a workplace culture where jokes aren’t allowed. Even if an organisation were brave enough to add such a policy into their HR code of conduct, enforcing it would be next to impossible, and would make for an incredibly miserable environment. In its most positive form, banter exemplifies everything that’s positive about being human. It’s what makes you laugh when watching your favourite panel show; it’s what makes spending time with your best friend so much fun; it’s a hilarious way to cement new friendships and reminisce about the past.

How then, should HR departments across the land navigate the treacherous waters of banter culture? A good rule of thumb is that any ‘joke’ that makes fun of a protected characteristic under the 2010 Equality Act is a no-go area. It’s also important to recognise that everyone has different levels of sensitivity about certain matters, and if someone begins to feel obviously uncomfortable about a ‘harmless’ gag, that eclipses the joker’s own feelings on the matter. Additionally, it helps for HR departments to educate staff on subject matter that has the potential to cause legal issues, verses what’s simply socially unacceptable. For example, being ginger is not a protected characteristic, but it’s easy to see how a teammate may end up feeling fed up and dejected if they’re singled out and subjected to endless jokes about their hair colour. Subject matter that’s likely to stir up argument and create division is also wise to avoid, such as someone’s political orientation or social background. Although it’s impossible to ban banter in the workplace in reality, it does help to have clear policies on the matter in place. If an employee feels that a conversation happening around them is inappropriate, they should know exactly who to tell, and feel confident that the matter will be investigated fairly. Above all, creating a positive workplace culture that upholds diversity and inclusion as a core value is key to maintaining an environment in which banter stays healthy and appropriate. If everyone knows what’s expected of them from the outset and management cultivates an atmosphere of mutual understanding and respect, employees will follow suit.

We’re making the world of work a happier place, one candidate at a time. We’ve hundreds of positions available in industries such as accountancy, human resources, marketing and digital, IT, and many more. Alternatively, you can search all our positions here, or register with us.