Talking About Race At Work: Why It Matters, And How To Start

Talking About Race At Work: Why It Matters, And How To Start

It’s not uncommon to hear people refer to themselves as ‘colourblind’ when it comes to race. What they mean, of course, is that they simply don’t notice another person’s skin colour or ethnicity, and that it plays no role in their decision-making. In fact, this well-meaning ideology dominated our society’s approach to inclusion and diversity for years; children were taught by educators that race should never be discussed, the subject was brushed over in political discourse, and it was certainly never a topic to be openly discussed in the workplace.

Despite the good intentions behind this approach, it doesn’t take an expert to figure out that remaining unaware of our differences is simply impossible. Children notice race several years before adults want to talk about it, and decades of research tells us that unconscious bias due to race and ethnicity is rife within working life and the hiring process. The idea of a colourblind society leaves people without the language to discuss race and examine their own bias, and simply brushes aside decades of structural inequality and discrimination. This is not only unfair to its victims, but also deprives us of the opportunity to build a more equitable and inclusive society.

Why Is Talking About Race At Work So Uncomfortable?

There’s a strange dichotomy between the conversations about race and equality that dominate business blogs and online workshops, and the lack of conversation that takes place in the workplace. We’re bombarded by discussions around the topic online, yet few are brave enough to broach the subject with friends, let alone at work. It’s hardly surprising -  it’s a topic that has the potential to offend, and for intentions to be misinterpreted. No one wants to appear racist, and members of the white British majority may also subconsciously feel guilty about benefitting from privilege and inequality. For members of minority communities, speaking about race may also be complex because of heightened emotions and trauma, which can add tension to any dialogue about the subject.

Engaging As An Ally

Recent research revealed that 4 in 10 people surveyed don’t think that race should be discussed at work – and 23% of people in a survey undertaken by Gleeson said the subject made them feel uncomfortable. However, we live in a society in which an astonishing 70% of UK adults from minority communities have experienced racial discrimination at work, and 8% left their job as a result. It’s a problem that isn’t about to go away, and it’s therefore incumbent on us all to take action – even if it involves uncomfortable conversations. So, how can the situation be approached productively and tactfully? 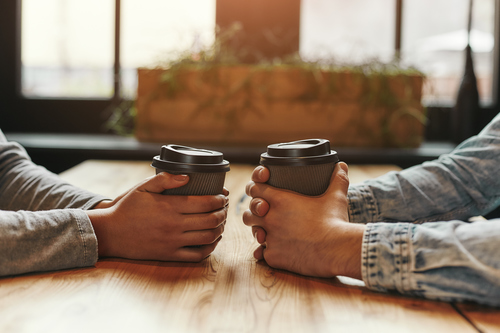 Educate yourself. Remember, it’s not the job of any minority group to educate you about the prejudice or discrimination they face. Take the time to learn about - for example - the historical struggles of the Black community before you engage in any conversations about it with your co-workers. Coming to the conversation with a basic understanding of history and the modern-day impact of racial dynamics will help your colleagues to trust you, and maybe bring some guards down.

State your intention. In order to discuss any sensitive topic, it’s vital to approach the situation with authenticity. Explain why you’re initiating the conversation, what you hope to gain from it, and ensure the other person is also happy to discuss the topic. If you sense any discomfort or hesitancy, it’s likely a sign the other person doesn’t feel comfortable opening up to you just yet, so be respectful of this.

Embrace curiosity. Many people from minority groups enjoy talking about their backgrounds and culture, and welcome the opportunity to inform and educate others. Asking questions about certain religious celebrations or customs is a great way to learn and expand your own horizons, as long as it’s done with tact. For example, if a member of your team is observing Ramadan, ask what you can do to support them – this can be a great way to open up a dialogue about the topic.

Don’t single anyone out. If you’re white, conversations about race shouldn’t only occur between you and colleagues from minority communities, as this could well make them feel uncomfortable and like they’ve been put on the spot. Instead, make an effort to also raise the subject with your white co-workers, too. You might ask them how they think their racial identity has impacted their worldview, or whether they think your own organisation does enough to create equal opportunities for all.

Embrace the discomfort. Just like those initial training sessions at the gym, when you first broach the subject of race, it will feel uncomfortable, but will quickly get easier with practise. If you’re a member of the white majority, at first you may feel defensive or guilty. If you’re a member of a minority community, you may feel like an uncomfortable spotlight is suddenly on you. However, remember that without difficult conversations, learning and growth is impossible.

Expect to make mistakes. Most people are uninformed about social issues that don’t negatively impact them, so it’s okay not to understand certain topics, or to sometimes use the wrong terminology. Approach discussions about race with the expectation that you may not always get things right, but be prepared to learn from your mistakes and the experiences of others and do better next time.

Create a safe space. It’s obviously inappropriate to suddenly accost your colleagues with conversations about race when they’re mid-way through a report with a tight deadline. It can therefore be useful to speak with your HR department and senior leaders about setting up dedicated times and places during which sensitive issues like race and inequality can be openly discussed. That way, everyone arrives emotionally prepared for the conversation, and you know you have full consent to raise potentially contentious topics. In addition, safe spaces like these could well lead to productive conversations about how equality and inclusion could be better managed by your own organisation.

Keep it going. Remember, this isn’t a one-and-done situation. Racial inequality didn’t appear overnight, and it certainly won’t be put to rest within your own organisation in a conversation or two. Rather, discussions about race should form part of a larger, ongoing dialogue that place authenticity and openness at the centre of your working culture.

Ultimately, talking about race at work can certainly be an uncomfortable experience, but that doesn’t mean we should shy away from it. Constructive and respectful conversations allow colleagues of minority communities to feel safe and included, and that their potential struggles are being acknowledged. Being a true ally means not watching from the sidelines, but standing up for the rights of others and staying true to your convictions through words and actions. Ignoring the issue of race at work whilst shouting about racial equality on social media during Black History Month sends a confusing message to those who may deeply wish that their own struggles were given more consideration – and that starts with brave conversations within the everyday spaces we inhabit.

Find a job that lets you be your authentic self. We’ve hundreds of positions available in industries such as accountancy, human resources, marketing and digital, IT, and many more. Alternatively, you can search all our positions here, or register with us.