Money - or lack of it - has a huge impact on all aspects of our lives, from the quality of our social connections and relationships, to the freedom to pursue further education, training, and hobbies. And when it comes to finances, women have to deal with extra hurdles that their male counterparts don’t. Not only are they more likely to be victims of financial abuse,  they must also contend with barriers such as the economic gender gap, which The World Economic Forum predicts will take 151 years to close. In practical terms, this inequality means that one in two women lose sleep because of financial worries, and that a female graduate who decides to work part time for just 3.7 years in her 30s will be earning 7.7 per cent less in her 50s – a fact that will eventually cost her £201,396 overall.

What is financial wellbeing?

The UK Money and Pensions Service defines individual financial wellbeing as ‘feeling secure and in control’ of both short-term and long-term finances, and has developed five core markers to indicate the status of financial wellbeing across the UK. These are: getting a meaningful financial education, saving regularly, manging credit, accessing debt advice and making good decisions about future wellbeing.

Which factors impact women’s financial wellbeing in the workplace?

Most of the unique financial challenges women face have their origin in the workplace, and many can be tied either to discrimination and prejudice, or the intersection of work and family life:

It may be hard to believe, but, according to the ONS, the gender pay gap amongst full-time employees in April 2021 was 7.9%. There are numerous reasons for the persistence of earning disparities between genders, such as more men than women in senior roles, unequal division of caring responsibilities between couples, and an undervaluing of roles that tend to attract more women such as nursing and teaching.

Not only do women take on the lion’s share of childcare responsibilities, they’re also predominantly responsible for taking care of elderly parents. This means that women are more likely to take longer career gaps that can set them back professionally, choose part time work that could see them financially disadvantaged, or miss out on training and progression opportunities that could boost their earning power.

3. Pregnancy and the menopause

The so-called ‘motherhood pay penalty’ reduces a woman’s earning potential by up to 10% per child, whereas fathers experience no such drop in salary. Furthermore, mothers are far less likely to be hired in the first place, or promoted. At the other end of the spectrum, women experiencing the menopause are often unfairly penalised due to their symptoms interfering with working life, overlooked for promotions, or in some cases, forced out of their roles altogether.

Men still dominate senior roles in UK workplaces, with just 38% of all positions held by women, despite them making up roughly half of the working population. Additionally, sectors with high-earning potential such as tech and engineering are disproportionately male-dominated. For example, women make up around 11.5% of all game developers, and less than 25% of all STEM jobs in total. 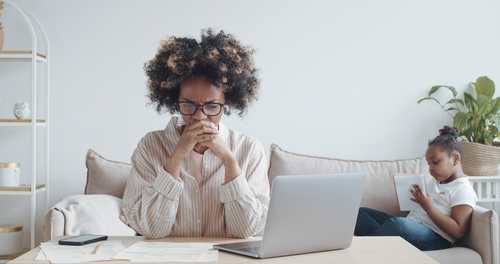 Research has demonstrated that, on average, women are less financially literate than men. This manifests in women being half as likely as men to be ‘very engaged’ with their pension, and only half being aware of how much money is being saved per month. Research by the FCA  also demonstrates that 60% of women have low financial knowledge and capability. The reasons behind this disparity are unclear, but experts believe it may be rooted in the persistence of traditional gender roles, along with a lack of confidence.

How can women’s financial wellbeing be improved?

As Saijal Patel, founder and CEO of financial wellness education and consulting firm Saij Elle, explains, “While women have made tremendous progress in creating wealth and contributing to the global economy, the financial wellness gap between men and women remains high. Women continue to face unique challenges in reaching financial security – a wage gap, career breaks for caregiving duties, and financial systems that cater to men more than women.” Like many experts, Saijal believes that boosting women’s confidence when it comes to financial empowerment and decision making is the first step. She explains, “To truly financially empower women, we needed to first remove the shame and stigma many feel for not having the financial tools, and then give them the knowledge and tools so they can navigate their most important personal money decisions.”

While founders like Saijal are taking the matter into their own hands, others believe that the onus for improving women’s financial outlook should lie with employers. Few businesses really take the time to understand the unique challenges women face within the working landscape, despite research showing 88% of HR professionals believe it is a business’s responsibility to provide support on all aspects of financial wellbeing. Whilst steps such as establishing equal pay and fair promotion of women are already on the agenda of most organisations, experts say that employers need to be considering the matter more holistically. Although men and women possess equal worth, this does not mean they should be treated identically. Women face unique challenges within their working lives, with health and family considerations that intersect with their careers much more significantly. Additionally, women face unique challenges in catching up with their male peers after any form of life or health-related change, such as pregnancy or menopause. For employers, this means considering each of these issues in turn, and establishing policies or resources that can provide real and meaningful support. It also means creating a culture of authenticity and openness in which women can share their financial wellbeing concerns, knowing that they will receive support instead of judgement. While women are used to being told that they “can’t have it all”, this ethos not only sets an impossible bar for female success, but also absolves employers of the responsibility to create environments in which women are empowered and supported to succeed. It’s therefore high time we stopped thinking in absolutes, and created a working landscape in which no one is forced to choose between their personal and financial wellbeing.

Let’s talk about women’s health and bodies in the workplace. Share your experiences and opinions using the hashtag #WomensWellnessAtWork, and let’s get the conversation flowing.