93% Of UK Employees Have Experienced A ‘Toxic Workplace’, Study Finds

93% Of UK Employees Have Experienced A ‘Toxic Workplace’, Study Finds

“My boss called me into his office and showed me a huge stack of papers. He said, ‘With all this evidence, I think it’s pretty clear you should resign.’ Weeks later, I discovered all the pages were blank.”

Most of us will spend one-third of our lives at work. We expect it to be a place we feel happy, supported, and free to be at our productive best. However, a recent survey by Gleeson Recruitment Group has revealed that an astonishing 93% of UK employees have experienced a toxic workplace, and 82% have left a role because of a toxic boss.

The survey showed that both men and women are just as likely to experience a toxic workplace, but surprisingly revealed that 60% of men have dealt with a toxic boss, compared to 40% of women.

The study, which surveyed 1,800 people, also drilled deeper into exactly which behaviours were most common within toxic cultures. Incredibly, over half of UK workers have been subjected to inappropriate comments, whilst a similar number have been pressured to work for free in their own spare time. Others have been forced to deal with unreasonable deadlines, and worked in an environment in which arguing and conflict is commonplace. 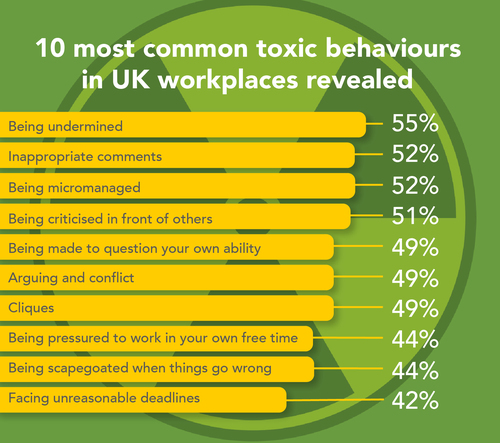 Reflecting on the shocking survey results, Suzie Hughes, HR director of Gleeson Recruitment Group, commented, “It’s well known that organisations which focus on employee happiness and wellbeing tend to experience greater productivity and innovation, so it’s disheartening to see that these behaviours are still so widespread in 2022. We know that problematic workplace cultures can have a dire impact on productivity, lead to higher employee turnover, and cause higher rates of absenteeism.”

Shocking behaviour across the UK’s workplaces

Many employees surveyed opened up about their own experiences within a toxic workplace, describing behaviours that would have most HR professionals reaching for the smelling salts. Felicity, a 38-year-old teacher from London, described her experience: “I’d been unfairly targeted by my boss for months. One day, he called me into his office and showed me a huge stack of papers. He said, ‘With all this evidence, I think it’s pretty clear you should resign.’ Weeks later, I discovered all the pages were blank.”

Appallingly, some workers even described instances of physical assault. Mike, a 38-year-old graphic designer from Birmingham, told Gleeson, “A client had asked for their money back, so we were all called into a meeting with the boss. He decided it was a good idea to throw a chair, which ended up hitting me in the side of the head. I wasn’t even given the afternoon off.”

Almost all employees that spoke with Gleeson admitted that the toxic behaviours they had endured had ended up having a catastrophic effect on their physical and mental health, with many suffering from anxiety and depression. Numerous workers also described environments which had negative consequences on their family and personal lives. 62-year-old Anna from West London who works in financial services revealed, “The culture at my last job was such that we all felt compelled to work 80 hours per week, or we’d be replaced. At the time, my mother was suffering from dementia, and I simply couldn’t be around to provide the care she needed in her final days. I explained my situation to my boss, but there was just no empathy there.”

Summing up the results of the survey, Suzie commented, “It’s clear to see that significant improvements still need to be made across the board in order for UK workers to feel safe and happy at work, and I’ve no doubt that toxic workplace traits continue to be a key contributor to The Great Resignation. However, I think it’s important to note that we’re also seeing a lot of organisations getting things right, and investing time and energy into improving the employee experience as well as work-life balance. Post-pandemic, I think we’re really at a crucial time for employee wellbeing. Companies that are prepared to put the effort in will reap the rewards, and those that don’t will flounder. It’s quite literally sink or swim.”