Is Unlimited Time Off A Scam?

Is Unlimited Time Off A Scam?

Burnout and stress is a huge problem in today’s workplaces. According to a recent largescale survey, 59% of millennials report experiencing burnout, along with similar levels of Gen Z. It’s no wonder then, that unlike generations before them, millennial and Gen Z workers are increasingly prioritising work-life balance, and flocking to employers that respect the importance of mental health. And at a time when competition for talent has never been higher, more and more employers are offering benefits that reflect these priorities. Along with the four-day working week, one such benefit is unlimited time off. This controversial policy started with Netflix back in 2010 and has been picked up by numerous other organisations such as LinkedIn, Asana and HubSpot. Although UK employers are by law required to offer significantly more holiday than businesses in the US, unlimited holiday is also becoming popular amongst UK companies including VisualSoft and JustPark.

What is unlimited paid time off?

As the name suggests, unlimited time off means that employees can take extra paid holiday above and beyond the usual 28 days. The term “unlimited” is a bit of an exaggeration, however, as most companies have rules or guidelines intended to prevent employees abusing the policy. This might include certain periods in which dates can’t be booked, or limits based on days that have already been worked. The idea behind the policy is that employees benefit from increased flexibility, get to enjoy more time with their family or pursuing hobbies, and are incentivised to make their time at work as productive as possible. In theory, it’s an excellent idea. For example, if staff often work irregular hours, answer calls in the evenings, or attend workshops or conferences on the weekend, it can be a good way to compensate for this. It can also be a brilliant way for businesses to recruit high-quality talent, and to demonstrate to existing employees that they will be judged on results rather than the number of hours worked. And it’s certainly a popular idea – a recent poll discovered that over half of employees would take unlimited time off in exchange for a lower salary.

So, what’s the problem with unlimited paid time off?

If given the option of unlimited time off, you probably imagine you’d take a few days off a month. Maybe take up a new hobby, tick off all those jobs around the house from your to-do list. However, the data suggests you’d almost certainly be wrong. In the US, a recent study found that employees with unlimited holiday take on average 13 days off a year compared to 15 days for their fixed PTO counterparts. In fact, administrate app CharlieHR recently cancelled their unlimited PTO scheme for this very reason, and UK recruitment firm Unknown also followed suit after finding that employees would not take more than an average of 21 days holiday a year – seven days less than their statutory allowance.

So, why do people seem unable to take advantage of unlimited paid time off, when it holds such promise to be the holy grail of work-life balance? Experts say this has to do with what companies claim to want versus the values demonstrated by their actions. If you’re stuck in a corporate culture that demands a 100-hour work week and none of your colleagues can remember the last time they took a day off, are you really going to be the one to have three weeks off to go to Australia and leave your teammates to pick up the slack? In a toxic work environment in which deadlines are tough and competition is high, unlimited time off can easily become a test. Who will prove their dedication to the company by taking the least amount of holiday? How are employees to know that the amount of holiday they’re taking won’t be compared against others, and used against them? Anxiety can also easily occur in healthy working environments. If employees feel they’re being treated well and are loyal to their company, some feel they are betraying that loyalty and being ‘ungrateful’ by taking more holiday allowance than they’re used to. There’s also the potential for an unequal system to be created. More established employees who’ve been with an organisation a few years and have already proven themselves are going to feel more comfortable taking extra holiday compared to an intern or junior employee who’s just started out and is feeling the pressure. 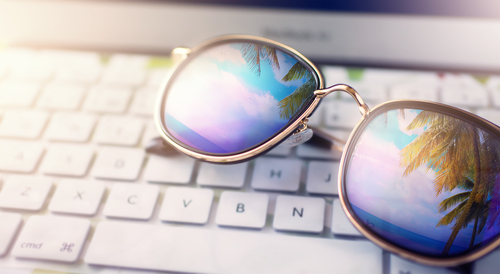 Is unlimited paid time off the future?

The policy of unlimited time off certainly holds some promise, but results so far have demonstrated that its success largely depends on the culture in which it’s implemented. Companies who have seen success with this policy are those that genuinely want to see employees enjoy meaningful time off, and uphold values that promote happiness, wellbeing, and appreciation as a motivator for high-quality work. Its success also largely depends on everyone taking advantage of it – if employees see their line manager taking a decent amount of holiday, they’re going to feel more comfortable doing the same. The policy also requires that organisational leaders keep a lookout for any team members who are taking less holiday than is expected, as this can easily create a domino effect in which their colleagues follow suit.

Is there a good alternative to unlimited paid time off?

Although unlimited paid time off makes for attention-grabbing headlines, employers who truly care about employee wellbeing might instead consider extending regular paid holiday allowance. While unlimited holiday is still a fairly new idea, too much anxiety currently exists surrounding what’s acceptable and what isn’t. This makes taking holiday subject to the same psychological pressures that keep people working ridiculously long hours – it turns a right to take 28 days holiday a year into an option that must be constantly negotiated. However, when employees are given extra holiday and this is embedded into their contract, they feel it is truly theirs to take, and feel comfortable doing so. Although there’s a fine line between too much and too little structure, it turns out that most of us do want a little guidance so that we know what’s expected of us. We want to receive what we’re entitled to, but we also don’t want to feel guilty about it or like we’re taking advantage. So, until we’ve collectively wrapped our heads around the concept of unlimited paid time off, employers who truly want to reward their team would be well advised to think more holistically.

Ready for a change? You’re in the right place. We’ve hundreds of positions available in industries such as accountancy, human resources, marketing and digital, IT, and many more. Alternatively, you can search all our positions here, or register with us.