5 Phrases You Should Avoid Using At Work At All Costs

5 Phrases You Should Avoid Using At Work At All Costs

Words matter, and the way you use yours at work could have a bigger impact on your career than you realise. And yet, professional communication can feel like a balancing act – you want to seem knowledgeable and confident, but you don’t want to come across as blunt or impolite. The way you communicate with your co-workers or boss can send subtle or overt messages about your level of commitment, your attitude, and your character, so it’s worth taking the time to think about. With this in mind, we’re taking a look at five phrases you should avoid using at work – and what you should say instead to sound professional, capable and proactive.

Adding a “just” before a request is something that women are much more prone to than men, and a habit that can often signal a lack of confidence. More likely to crop up over email, “just” minimises whatever follows, and indicates that the sender is worried about seeming like an inconvenience – as though whatever they’re about to say needs to be apologised for in advance.

What to say instead: “How are you getting on with…?”

Most people who overdo it with “just” are concerned about appearing rude. However, you can pretty much guarantee that nothing terrible is going to happen if you phrase your question directly, and you’re highly unlikely to offend anyone. In fact, psychologists agree that getting to the point faster is more likely to result in someone agreeing to your request, so concise and precise is the way forward! It might feel uncomfortable at first, but the more you get used to communicating directly, the easier it will become.

As long as you’re paying attention and doing your best to learn and improve, there really is no such thing as a stupid question – a philosophy that your manager and co-workers hopefully share. Everyone would rather you asked a question than guessed, although it’s probably a good idea to have a quick google first. However, drawing attention to the fact that you believe your question is stupid is best avoided, as this will only make you appear insecure and awkward.

What to say instead: “I’m assuming XYZ. Am I correct?”

Question asking is a skill, and one you can get better at with practise. Starting with the information you already know is a great way to make it easier for the person you’re speaking with to explain exactly what you need to know, while avoiding details that aren’t really necessary. It also reinforces to those around you that you’re familiar with the subject matter at hand, thus making you seem more competent and knowledgeable.

We understand. You’re tired, I’m tired, we’re all tired. In fact, 76% of people report feeling fatigued for much of the week and 30% are dissatisfied with how much they sleep. However, reporting that you’re tired not only makes other people feel deflated, but also indicates that you aren’t fully present. It also may make you sound bored or lazy despite your best intentions, and is unlikely to win you any favour with your boss. 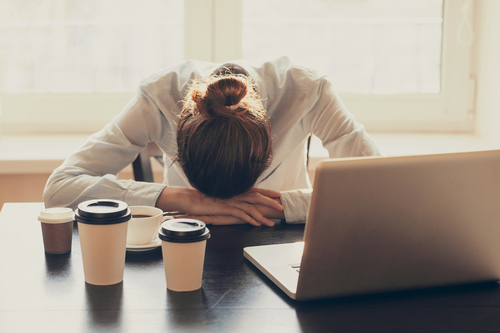 What to say instead: “Who wants a coffee?”

Constantly telling yourself and others that you’re tired only refocuses your mind on the very feeling you’re trying to escape. It’s also the last thing your colleagues need to hear on a Monday morning when they’re trying to get into a positive frame of mind for the week ahead. So, even if you are tired, try to find ways to re-energise yourself and those around you – offering to make a drink is a great place to start!

This innocuous phrase seems polite and respectful enough, and dropping it in at the end of an email chain might seem like a good idea. However, it’s not always helpful. It provides no clear direction, doesn’t identify next steps, and worst of all, puts the onus on the other person to move a project forward.

What to say instead: “I’ll be working on XYZ to get this moving forward, and I’ll follow up with you soon.”

In an age of packed schedules and heaving inboxes, you’ll stand out by taking initiative. Should a call be made? Does a meeting need to be scheduled? What sort of deadline are you working with? Focus on figuring out what you can contribute to the discussion at hand, let everyone know how you’ll be helping to get the task done, and when you’ll be following up to discuss further.

This is another one that screams insecurity. It’s a filler phrase just like “I mean” or “you know”, and one that we’re sometimes tempted to add to fill the silence if people don’t respond straightaway. Even worse, this phrase could imply you don’t fully understand the idea yourself, and that you’re looking for reassurance from others.

What to say instead: “What are your thoughts?”

This phrase provides others the same opportunity to respond to what you’ve said, without undermining any of the information you’ve provided. As long as you stay approachable and provide others with plenty of opportunity to ask questions if they need to, they should feel comfortable in letting you know if anything you’ve said actually doesn’t make sense.

Ultimately, the words we choose say a lot about us, and hold power that we don’t always give them credit for. We all want to be viewed as capable and competent in the workplace, and thinking about our everyday language choices is an easy way to achieve this. When you speak with conviction, precision and enthusiasm, you’ll effortlessly appear more confident – a factor that scientifically correlated with professional success. So, the next time you’re tempted to moan that you’re tired for the third time on a Monday morning or ask if you’re making sense, think twice!

Looking for a new career challenge? You’re in the right place. We’ve hundreds of positions available in industries such as accountancy, human resources, marketing and digital, IT, and many more. Alternatively, you can search all our positions here, or register with us.