6 Phrases To Avoid During A Job Interview

6 Phrases To Avoid During A Job Interview

If it seems like everyone is celebrating a new job recently, you’re not imagining things. One quarter of UK workers have either already moved roles this year or plan to, prompted by an unusually high number of vacancies combined with pandemic burnout. If you’ve been taking stock of your own options lately, there’s never been a better time to make your move. However, for many people, there’s one huge obstacle that stands in the way – job interview anxiety.

In theory, a job interview ought to be a mutually investigatory conversation between employee and potential employer. In practice, however, it can very much feel like you’re the one in the hotseat, and that your every word is under scrutiny. Whilst most interviewers are willing to account for nerves, it’s certainly true that they’ll be listening closely to what you have to say to examine whether or not you’re the right candidate for them. With this in mind, let’s take a look at six phrases you should avoid during a job interview, and what you should say instead.

You stay until 6.30pm every night, you haven’t had a pay rise in years, and your co-workers are toxic. We get it, but no matter how unpleasant your current working environment is, your potential new employer is unlikely to want to hear about it. This might seem a little unfair if your genuine reason for wanting to move roles is that your job is awful, but the issue here is sounding like an unprofessional employee willing to trash talk your employer. After all, if you’re willing to speak badly about your current company, you might do the same with your future one. It can also make you come across as gossipy and difficult to manage. That’s not to say that you can’t be partially honest about your motivations for moving, you’ll just need to keep an eye on your phrasing, and be sure to reinforce that there are aspects of your role that you enjoy and excel at.

Instead say, “There are aspects of my current role I really enjoy, but I feel I’ve accomplished all I can and am ready to make a change.”

2. Don’t say, “I think my biggest weakness is that I’m such a perfectionist”

If you think employers haven’t cottoned on to this old trick by now, you’re very much mistaken. Even if you really do work too hard or obsess over tiny details, expressing this when you’re asked about your biggest weaknesses will only come across as disingenuous. What your interviewer is really interested in is seeing that you’re capable of honest introspection, as this is an indication that you’re capable of working on your flaws and improving them. You should obviously be careful not to choose a weakness that just seems lazy (like always being late or talking too much) and instead choose something that’s natural and relatable.

Instead say, “Sometimes I get caught up on small details and forget to see the bigger picture.”

Unless you’re very lucky, chances are, there will be aspects of the role you’re interviewing for that are new to you. This is totally okay, and something your prospective employer will fully expect. However, phrasing it in this way without offering any further explanation can come across as a little negative as well as blunt and unenthusiastic. Even if an area of discussion arises that you’re a little unfamiliar with, explain what you know already, and express that you’re very keen to learn more. Additionally, talk about any experience you have that’s similar, and the relevant skills you have that will allow you to learn and adapt.

Instead say, “I’ve substantial experience in X as well as training in the area of X, so I’m keen to learn more about this area and confident my existing skills will allow me to progress quickly.”

Remember, the key is to always convey positivity and enthusiasm, and show that you’re ready and willing to take on new challenges.

This is another one that might sound a little unfair if you genuinely thrive on working with others within a supportive environment, but the fact of the matter is that the phrase has become yet another job interview cliché. Similar tired buzzwords include ‘people person’, ‘driven’ and ‘highly motivated’. It’s not so much about the sentiment as trying to find a new way to express it, otherwise it can sound like you’ve simply memorised certain words or phrases in a bid to appear as employable as possible.

Instead say, “I thrive on collaboration, but also enjoy the challenge of tackling projects independently.” 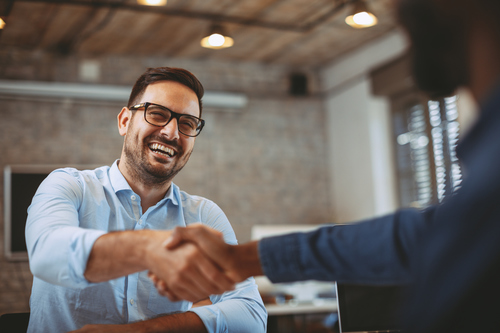 Whilst there’s always the chance the role you’re applying for is one you dreamt of as a child, it’s more likely that it’s simply the one that best fits your current skillsets and requirements. Again, this is something that employers are fully aware of, so there’s no pressure to pretend. Instead, it’s better to convey your enthusiasm with substance, and communicate exactly what excites you about the role along with how you’d harness that energy to overcome possible challenges. Ultimately, it’s more important to focus on why you’re the dream employee, rather than why the role is your dream job.

Instead say, “I’m really excited about the possibilities and challenges this role entails, and feel it would be an excellent match for my skillset.”

You might well be shaking in your boots, particularly if this is a role you’ve really set your heart on. However, no one wants to employ someone who’s lacking in confidence, particularly confidence under pressure. As the old saying goes, fake it till you make it – speak clearly and articulately, smile, and deliver your answers with conviction. If you’re concerned you might be asked a question you don’t know how to answer, come prepared with notes, and have a glass of water to hand so that you can gain a few extra seconds of thinking time as you take a sip.

Instead say, “Thank you for meeting with me, I’ve really been looking forward to this opportunity.”

Even if you’ve actually been dreading your interview, a simple technique known as anxiety reappraisal has been shown to help channel jitters into improved performance. Because anxiety and excitement are both emotions that provoke similar levels of arousal in the brain, we can actually trick our minds into believing we’re looking forward to something rather than worried about it. Who knew?

Ultimately, your interviewer will be looking for a few characteristics; someone who’s enthusiastic and confident they can take on the role, is knowledgeable about their sector and profession, and seems like they’d be pleasant to work alongside. They’re rarely seeking someone who has all the answers, and understand that nerves can cause a few slipups. Although it might seem like an unnatural environment, your prospective new employer really does want to see a glimpse of your real personality, and will be sceptical of rehearsed cliches. If you’re really unsure of your interview technique, it never hurts to practise with a trusted friend or family member beforehand who will give you some honest feedback. Above all, remember that confidence is key – if you believe in yourself, others will believe in you.

Looking for a new opportunity? You’re in luck. We’ve hundreds of positions available in industries such as accountancy, human resources, marketing and digital, IT, and many more. Alternatively, you can search all our positions here, or register with us.