Older Workers Could Be Your Biggest Asset. Here's Why.

Older Workers Could Be Your Biggest Asset. Here's Why.

Okay boomer. It’s a popular refrain these days. Although those using the term will insist it’s ‘just a joke’, the phrase has recently been blamed for putting an end to friendly intergenerational relations. Although Gen Z has plenty of reason to be angry and fearful over inherited problems such as financial inequality and climate change, when such sentiment seeps into workplace culture, it can be bad news. Despite the fact that discrimination against employees on the basis of age is strictly prohibited under the Equality Act of 2010, recent research indicated that it’s actually one of the most common forms of discrimination in the workplace. This can manifest in a range of negative employment consequences, from being pressured into early retirement, to being singled out for redundancy and passed over for promotions. Although younger workers also suffer from discrimination on the basis of age, it’s much more prevalent in employees over the age of 50. And just in case you were about to breathe a sigh of relief, troubling statistics indicate this can kick in as early as our 40s.

Although the ‘cult of youth’ has continued to grow across all industries as technological advantages have accelerated, organisations are beginning to realise that the trend of workers becoming obsolete in their 50s is not only illogical, but unsustainable. Figures indicate that over the course of the next decade, 13.5 million job vacancies will open up through new roles being created, or people exiting the workforce and needing to be replaced. Conversely, only seven million will leave education and enter the workforce. It’s high time, therefore, that companies began to realise that older workers could in fact be their biggest asset. Think about it – the most important job in the world has recently been appointed to a man pushing 80!

So, without further ado, let’s take a look at some of the reasons investing in ‘silver talent’ is an excellent idea.

Despite people like Mark Zuckerberg publicly stating that “young people are just smarter”, actual research paints an altogether different picture. Although for most of us ‘mental horsepower’ begins to decline after the age of 30, older people are every bit as capable of learning new skills, and have been demonstrated to hold greater levels of knowledge and expertise – both of which are the main predictors of job performance. It stands to reason that people who have worked within a sector for many years will have amassed an impressive degree of experience, and will be less error-prone. Furthermore, people of advanced years have been demonstrated to be more articulate, continuing to expand their vocabulary and hone their expressive abilities. If you’ve ever witnessed a pensioner whiz through The Times cryptic crossword, you’ll understand.

Once again, scientific evidence shows us that older people have more advanced inductive reasoning skills. This means they’re less likely to rush to judgement based on feelings or intuition, instead relying on data. This can be a great advantage not only in managing a team, but with problem solving and managing day-to-day tasks. The amygdala - the area of the brain which consolidates emotion and memory - is less responsive to negatively charged situations in older people. This means they’re less likely to ‘fly off the handle’, instead tending to handle situations with tact and sensitivity. Furthermore, older workers have simply had more time to develop their interpersonal skills. They’ve likely come across just about every type of character you can think of, making it difficult to catch them off guard. Perhaps most importantly of all, empathy has also been shown to increase with age, making older workers more physiologically in tune with other people’s feelings and perspectives. This characteristic is well known to be one of the most important predictors of successful management, and is closely linked to emotional intelligence. 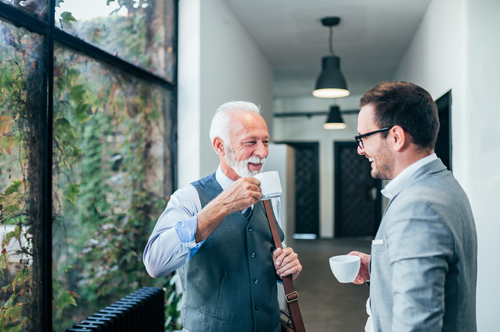 People who are resilient are more able to quickly recover from challenges and difficulties, which is naturally a big plus within any working environment. Over the past year, the Covid-19 pandemic has caused an increase in disorders such as anxiety, depression, and PTSD. However, interestingly, older adults have weathered this storm more easily than their younger counterparts. Why? Because, according to the medical community, they’ve a lifetime of overcoming challenging and difficult situations behind them. It’s only natural, then, that this phenomenon should also translate to the workplace. This characteristic is closely linked to adaptability – a key soft skill which enables people to rapidly learn new skills and behaviours in response to changing circumstances. Despite the fact that older people are traditionally seen as less adaptable, stereotypically struggling with new technologies and cultural shifts, research yet again has demonstrated that managers aged between 45 and 54 have a greater ability to adapt to change than those in younger age brackets.

Here at Gleeson, we’re big believers in the power of mentors. That’s because employees benefiting from the guidance of mentorship have been shown to experience higher levels of job satisfaction, achieve promotions more easily, and feel more committed to their careers. Older workers naturally make better mentors, for a variety of reasons; they’re more experienced, have greater knowledge, and a more developed sense of perspective. For younger employees, this can also set up the valuable opportunity for reverse mentoring, in which less experienced team members also provide advice and guidance to their seniors. A poll conducted by Nationwide also discovered that 88% of people believe that having an older colleague within their team has a positive impact on the workplace. Part of the reason for this could be that it brings comfort to other team members to see that they will still be valued in their later years, contributing to engagement and generating increased respect for their employer.

As the old saying goes, it’s not what you know, it’s who you know. This is true for almost any organisation, and a great deal of repeat business is sustained solely on the basis of strong relationships that have developed over time. Clients appreciate speaking with an expert who can not only anticipate their requirements, but understand their industry inside out. In fact, in a recent survey, 86% of people stated that customer experience is just as important as a product or service itself. Through a combination of honed interpersonal skills and many years of experience, yet again, older workers have the advantage here. Furthermore, senior employees have simply had more time to build up their network of contacts, and the more contacts a business has, the more leads they can generate. Clients will also naturally respect and value the advice given to them by someone with significant experience under their belt, which makes the process of selling a lot less challenging. 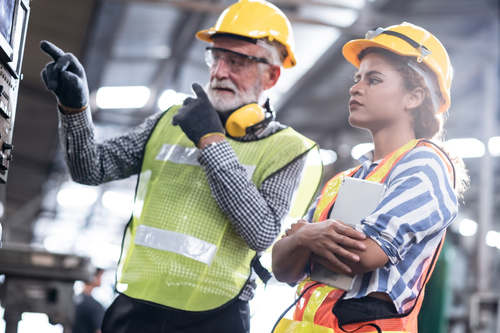 Of course, anyone who’s keen to take advantage of the benefits listed above will need to ensure that their workplace is attractive to, and accommodating of, older workers. Let’s look at some of the ways organisations can achieve this.

Health and wellbeing became an increasing concern as we age, so any employer that takes this seriously will win favour with older workers. You might consider making private healthcare available, for instance, or contributing towards the cost of prescriptions.

Training tailored towards older workers is a benefit that will be very much appreciated. When it comes to new technologies, much of the information out there is geared towards a younger audience, so by considering the specific needs of senior workers, you’ll be going above and beyond.

Being flexible is an important benefit for all team members, but especially older workers. Allowing flexible schedules and remote working where possible will enable more senior employees who may be unable to travel or work regular hours to still make a valuable contribution.

Retirement savings are also an important consideration for older workers, who want to be able to live comfortably in their later years. Organisations should consider offering plans that enable employees to maximise their savings, as well as the option to increase their pension through salary sacrifice. Offering financial advice is also a great added benefit that all employees can benefit from.

Flexible retirement options will also really allow your organisation to stand out from the crowd. Research shows that most older workers don’t want to abruptly retire, but would prefer to ease into this next phase of their life slowly. Therefore, it’s a good idea to allow employees to gradually reduce their hours, and to even retain the option to occasionally help out even after their official retirement date.

Find the perfect job for you, no matter your age. We’ve hundreds of positions available in industries such as accountancy, human resources, marketing and digital, IT, and many more. Alternatively, you can search all our positions here, or register with us.